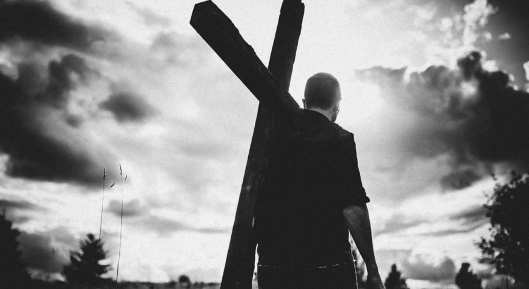 When I was in school, I remember coming across a book whose title both intrigued me and made me, as they say in my neck of the woods, “a mite nervous.” The title read, Ten Things I Wish Jesus Had Not Said, and honestly, I’m shocked that there were only ten. My personal list of things I wish Jesus had not said would surely be much longer, for I find Jesus to be incredibly attractive and incredibly difficult at the same time.

The lectionary text from this past Sunday provides a case in point of one such proclamation. Speaking to a large crowd of people, Jesus tells them, “Whoever comes to me and does not hate father and mother, wife and children, brothers and sisters, yes, and even life itself, cannot be my disciple. Whoever does not carry the cross and follow me cannot be my disciple.” (Luke 14:25-26 NRSV)

So, let me get this straight, Jesus. I’m supposed to love my enemy, but hate my family? I’m sorry, but something in that just doesn’t compute. We explored this paradoxical command in some depth on Sunday. However, it is to the second part of this quote that I want to turn attention, for we ran out of time time before considering the difficulty of carrying our cross.

Recently, I have have been reading James Cone’s excellent book, The Cross and the Lynching Tree. I say excellent not because it is an enjoyable read by any means. It is painful . . . but it is true. It makes me sick . . . yet opens the way for hope. I fell overwhelmed and emptied by grief . . . yet filled with the expectation of resurrection.

A child of the South, I have not been completely insulated from images of dark-skinned bodies hanging from tree limbs while light-skinned faces turn to grin at photographers in macabre scenes that defy explanation. Likewise, with three generations of Methodist pastors populating the family tree behind me, I have seen my fair share of images depicting Jesus hanging upon the tree of Calvary. They were images of Jesus (incorrectly depicted with light skin, I might add) beaten and bloodied, bearing the sins of the world, and dispensing forgiveness as it flowed from his hands and feet, from the the words of his mouth, and from the love so obviously spilling over the edges of his heart.

I hesitate to admit, however, that until recently I had had failed to truly consider the link between these two scenes. Somehow – maybe due to sheer ignorance or maybe in an effort at self-preservation – I failed to see the symmetry of these two “symbols of terror, instruments of torture and execution, reserved primarily for slaves, criminals, and insurrectionists – the lowest of the low in society. Both Jesus and blacks were publicly humiliated, subjected to the utmost indignity and cruelty. They were stripped, in order to be deprived of dignity, then paraded, mocked and whipped, pierced, derided and spat upon, tortured for hours in the presence of jeering crowds for popular entertainment. In both cases, the purpose was to strike terror in the subject community. It was to let people know that the same thing would happen to them if they did not stay in their place” (The Cross and the Lynching Tree, p. 31)

Cone’s over-arching thesis is clear: “Until we can see the cross and the lynching tree together, until we can identify Christ with a ‘recrucified’ black body hanging from a lynching tree, there can be no genuine understanding of Christian identity in America, and no deliverance from the brutal legacy of slavery and white supremacy” (p. xv).

And then it hit me.

Maybe the reason that this passage is so foreign to me – the reason I might have such a hard time identifying with the idea of taking up my cross – is that I (and people that look like me) would have more likely been found in the lynch mob rather than be one of its victims. While I hope not, it’s entirely possible that some of my Mississippi forebears did in fact find themselves among the throngs drawn to that gruesome, gut-wrenching scene like a moth to a flame. It’s likely that my people took part in actions that turn my stomach today. And while I’ve never been part of a lynch mob, it’s entirely possible that my own privilege becomes one of the greatest stumbling blocks in my own attempt to follow the Way of Jesus – the way of the cross. In other words, I am a descendant of Roman oppressors, not oppressed Jews.

Is it possible that white Christians like me really do have a hard time “taking up our cross” because it is so foreign to our experience? Is it possible that I’ve imagined myself in the wrong place of the story for my whole life? Is it possible that I have more hurdles to overcame than I ever realized? If I imagine Jesus speaking to a divided crowd, I’m becoming more and more convinced that he is directing his speech at the other side . . . at my perceived enemies rather than at me. So I crane my neck, and strain my ears, trying to pick up the words of life that he speaks. “What did he say? I can’t quite make it out? It was something about the cross. I don’t quite understand.”

I’m having trouble understanding and trouble following because these words – while spoken to me aren’t spoken near me. I’ve been sitting in the cushy reserved seats and here Jesus is speaking to the standing room only crowd, the general admission seats on the infield grass. Privilege has become an additional obstacle to true obedience and true discipleship. “For the message of the cross is foolishness to those who are perishing, but to us who are being saved it is the power of God” (1 Corinthians 1:18).

Now, as seminary professor once told me, “It’s bad enough to be understood. You definitely don’t want to be misunderstood.” Therefore, let me be clear: Romans were definitely found among the community of Christ followers. Think of the centurion in Matthew 8. Jesus commended his faith and healed his boy. Think of Cornelius in Acts 10 and 11. The Spirit fell on him and he was surely saved, but I imagine that it took owning his place in the story. In other words, just because I find myself on the other side does not mean that I am beyond the reach of Christ’s salvation. It just means that I have a little more work to do in order to take hold of it and to make it mine.

I’ll be honest. I’m not exactly sure what to do with this new realization. But I know this for sure: I cannot hear Jesus’ words the same any longer. I cannot unsee what the Spirit has allowed me, in faith, to see.

Lord, I want to follow. Open to me the Way.

1 thought on “Take Up Your Cross…”

This blog contains personal reflections and opinions of the author and does not necessarily reflect the opinions and beliefs of any of the organizations with which he is affiliated.
Loading Comments...
%d bloggers like this: